inst, upgrade, apt-info, apt-changes.... are my aliases. You must use YOUR ALIASES for this to work. To add aliases, read this.

After finding myself frustrated with Vinagre's (GNOME's standard VNC viewer) lack of ssh tunneling support I began looking for an alternative. I finally found it: Grdc.

Grdc supports both VNC and RDP. Grdc can tunnel both connections over ssh for security. The ssh tunneling supports key based or password based authentication and allows the user to select a custom server and port (if they differ from the defaults).

Grdc's user interface is much simpler than that of Vinagre. It allows the user to create and save custom connections and organize them by groups. Its connection quality settings are, unlike many remote desktop programs, quite simple. The user simply chooses the quality and the number of colors. Grdc also has a panel applet for the gnome-panel that lets users connect to their saved connections through a simple menu.

Another interesting feature is the "VNC Incoming Connection" protocol. This protocol lets users create new VNC servers with custom ports and passwords on the fly. This is especially useful if a user wants to let a remote user temporarily control their desktop.

Overall, Grdc is good for remote, internet traversing connections because of its ssh support and is useful to the average user because of its simplicity. Vinagre is still a better VNC client for administrators that have to manage many computers over a LAN because, on a LAN, encryption is usually unnecessary while avahi support is helpful and, when managing multiple computers, tabs are very helpful.

As of the writing of this post, the version of Grdc in the ubuntu repositories is woefully out of date and does not support ssh tunneling. Therefore one should use the deb provided by the project maintainers on sourceforge. Simply download the grdc deb (link below) and install (usually just double click). The grdc-gnome package is the gnome-panel applet and the grdc package is the main program.

-- Edit: I have packaged a 64bit version. Download here.

-- Edit 2: The 64bit version of grdc-gnome (the panel applet) for karmic seems to work in jaunty. Download here.

I posted a simple tip to an Identi.ca user (mxc) explaining how to record a skype conversation and felt that others might find the information useful. Here is an elaborated explanation of how to record the sound from a linux computer.

This should record all sound from your computer if you are using pulseaudio. I have not tested this with skype but it should work.

Attached is a simple Identi.ca feed fetcher script written in python. It is a console program and has no gui. It will display the same content as would appear on a users Identi.ca homepage for a given user. Edit the configuration at the head of the script before use.

I Just wrote a banshee plugin for mumbles. It works much better than banshee's default notification daemon integration. Clicking on the notification brings banshee to the front. Install it like you would any other mumbles plugin (see two posts back or look for instructions on the mumbles homepage).

Here is a screenshot of mumbles. 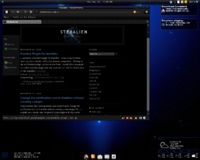 I have noticed that several people have asked how to change the notification icon on mumbles without creating a new plugin.This is actually very simple: use the generic DBus plugin with dbus-send. I believe that this tutorial requires the SVN version but I may be mistaken. First add a new section to your DBus plugin configuration file. If you do not have this configuration file, copy the sample one from the mumbles source tarball (found on the project's homepage). The file is called dbus.conf.sample. Copy this file to ~/.mumbles/dbus.conf. The new section is as follows:

Put your-icon.png in the ~/.mumbles/plugins/icons/ folder.your-signal is your name for the alert. None of these variables are important but they must be consistent.

After doing the previous and restarting mumbles, run this command:

Make sure that you replace all necessary variables. This will display a mumbles popup with your custom icon, title, and message. You can also specify a click action using launch = action.

I have been playing around with mumbles lately and have written a gmail plugin for anyone interested. Mumbles is a notification system that works very much like growl for the mac. The latest SVN version can even replace the gnome notification daemon (but not very well). While still in its infancy, this project shows a lot of promise. I based the plugin on the evolution tutorial on project's homepage. I based the script on this script (with many modifications). When you click on the notification popup, evolution will launch (you can edit the source to change the program). The script requires python-feedparser.

Do step 2 from the next section. Now copy the plugin to ~/.mumbles/plugins/.

Installing the plugin from source (adapted from dot_j's ~~tutorial~~ (gone)):

Download the package and extract. Then open a terminal window inside the plugin-source folder.

2. Create the directory structure and choose an icon

Then either run this to use the default evolution icon...

Or just copy your desired icon into the plugins/icons folder and rename it to evolution.png. This is unnecessary if you already have the evolution plugin.

Build and install the plugin

This will use our setup.py file to create our plugin. After it runs, you should see a file named GmailMumbles-0.1-py2.5.egg in the dist directory that was created by the build process. Here the -py2.5 part of the filename refers to what version of python you are using (it may vary, but if you are able to start mumbles, should not matter).

The .egg file is our plugin, so the only thing left to do is copy that to the mumbles plugin directory.

Find the script in the package and edit the username and password variables. Run this script with python /path/to/gmail.py (replace /path/to with the path to the script). By default, this script will check for new email every 2 minutes and alert the user of new mail.

BTW: This script does not safely store the username and password. I may, in the distant future, make this script work with gnome-keyring but this is not likely. I hope that mumbles will soon get better notification-daemon support so that I can go back to using mail-notification.

I am noticing a very annoying and self-defeating trend with OpenIDs. The main purpose of OpenID is to allow people to have one login for multiple sites. OpenID is pointless if few sites accept it. This problem will correct itself eventually as more sites adopt OpenID. The biggest problem is the number of sites providing and not accepting OpenID. This defeats the whole purpose of OpenID. It is pointless to have a myriad of choices for OpenIDs if you can't use them anywhere. Multiple OpenIDs for multiple sites just means multiple logins which is the very thing that OpenID is supposed to fix. I hope that many sites *ahem blogger* will soon start accepting OpenIDs as login credentials instead of just providing them.

I am starting to see this very often and find it very annoying: people report a bug, later they find a preexisting report for the same bug, they then mark that preexisting bug as a duplicate of their bug. I end up getting lots of "this bug has been marked as a duplicate of bug x" emails and this is VERY annoying. To prevent this people need to rigorously check for a preexisting report. Second, when you find two duplicate bugs, search the bug tracker for any more duplicates and mark all of the newest duplicates as duplicates of the oldest bug. This prevents chains of duplicates which in turn maximizes the efficiency of the bug reporting and fixing process.